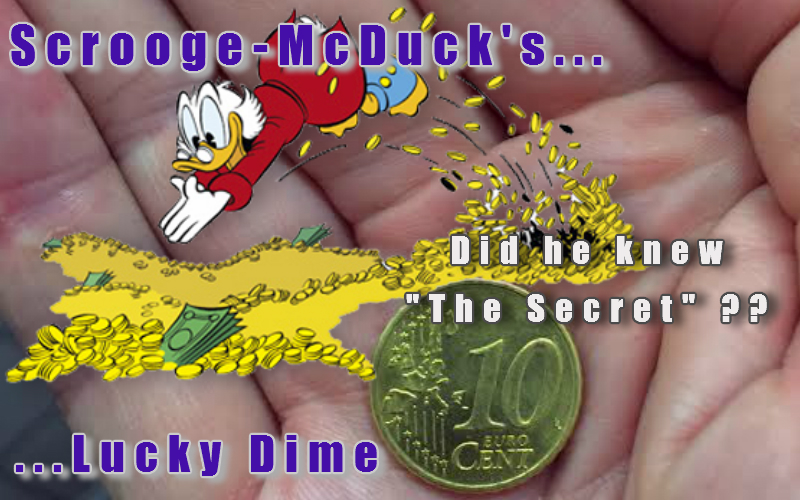 I work at the Metro-Subway in Amsterdam the Netherlands and today (25 June 2016) I found a dime on the floor. This is nothing special because I find regularly coins on the floor. But this time it was different because I got a very strong feeling to keep this dime and put it in my hand. On that moment my Inner Voice told me that this is exact like the “Lucky Dime” of Dagobert Duck (eng. Scrooge McDuck). Because I’m using the “Law of attraction” I act to do what I was feeling and put the dime in my pocket. Regularly I picked it out of my pocket and take it in my hand and visualize and feel that I’m wealthy. From this moment this is my personal Lucky Dime and I will seal it with the picture that I saw in my mind and found that picture on Google so it can not be lost and keep it safely in my wallet. With my Inner Dialogue technique I discovered a lot about Scrooge McDuck and I am convinced that he used “The Secret” and the “Law of Attraction” without knowing this like me in the past.

Scrooge McDuck’s Lucky Dime
The Number One Dime is the first coin that Scrooge McDuck had ever earned. It first appeared in an Uncle Scrooge comic story titled “The Round Money Bin“, created by Carl Barks and first published in Uncle Scrooge #3 (September 1953). In DuckTales, the dime is a generic white metal coin marked with a large “10” on its surface.

In later stories, it is insinuated that the dime brings good luck to Scrooge and has helped him become a rich man, and in some stories he instantly starts losing money whenever the dime is no longer in his possession. It is not clear whether the dime actually brings good luck or if Scrooge merely believes in it so much that he is distressed and makes bad decisions whenever he no longer has the dime. 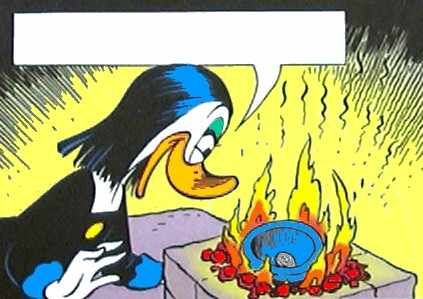 The dime is a key plot point in practically every story featuring Magica De Spell as the main villain. Magica believes that by stealing the first coin earned by the richest person in the world and melting it down to a magical amulet, she can gain the power of the ancient King Midas, so that everything she touches becomes gold and she can be rich beyond her wildest dreams (se also must knew about the Law Of Attraction). The fact that this will only work if the coin indeed belongs to the richest person in the world at the time, and is the first coin that person earned, is crucial, and is made into a plot point in some stories.

Although Carl Barks showed us this old dime in a total of 11 stories (American nickname for a 10-cent coin), it is still shrouded in veils of mystery. Not just for its alledged luck-bringing qualities but also how and when Scrooge actually got hold of it.

In U$36 The “Midas Touch” Donald says to Scrooge, You know, some people think that old dime is the secret of your wealth – that it’s worked as a sort of charm for you!, and Scrooge responds, Bah! Mere superstition! Thriftiness is the secret of my wealth! And this old dime is a symbol of that thriftiness – nothing more! Nevertheless, in one story we learn that the dime apparently do have some sort of luck-bringing qualities. In U$46 “Lost Beneath the Sea” Scrooge loses his coin and his whole business empire suffers. This suggests that the dime has some powers after all.

Magica de Spell, Scrooge’s most dangerous opponent, has no doubt that the dime is a luck-bringer. The superstitious sorceress does everything in her power to get hold of the coin in order to melt it down into an amulet that will be the most powerful lucky charm on Earth. Why? She explains it when we first meet her (in WDCS265), I’ve got to have that dime! I’ve figured out a new formula for making it’s powers turn me into a rich billionairess!

In U$44 The Invisible Intruder (which was NOT written by Barks) it is shown that young Scrooge started working as a shoeshine boy. This was his first paid job. In a letter dated March 31, 1991, Barks wrote to artist Don Rosa about the origin of Scrooge’s first dime: I think I mentioned once in an early story that he earned that coin by shining some man’s particularly muddy shoes. Wish I could remember the issue number, etc. Was his client a miner? A nobleman? A banker? Can’t recall.

Scrooge never completed a formal education, as he left school at an early age. However, he has a sharp mind and is always ready to learn new skills. Because of his secondary occupation as a treasure hunter. Both as a businessman and as a treasure hunter, Scrooge is noted for his drive to set new goals and face new challenges. As Carl Barks described his character, for Scrooge there is “always another rainbow“.

I am convinced that the Invisible Intruder must be someone that told Scrooge McDuck about “The Secret” and the “Law of Attraction” and gave him a 10 cent coin for polish his muddy shoes. So McDuck must have had to be very happy with his first double profit and he decided to keep this coin as a memento to focus/visualize to achieve his goal “Work Smarter, Not Harder“. So he learned this technique to get wealthy and I think also Magica de Spell must knew something about this “Law of attraction“. Maby she was in the neighborhood and listen what the invisible intruder told to McDuck (Who knows).

What YOU can learn from this…

What everyone did in the past who knew “The Secret” is kept it for their selves because they are afraid that there is not enough abundance for all people. Also, if miracles happen with all kind of objects the greedy people want to have that power for their selves and want that object. But what they do not understand from “The Secret” is that these objects are linked to the people who have the attraction and meaning with it. In the movie “The Secret” there is also a story from “Lee Brouwer” that he found a normal rock where he was attracted to. So he used this rock as his “gratitude rock” to focus/visualize and achieve his goals that’s why he kept it in his pocket. Every time he picked up his “gratitude rock” he felt how gratefull he is and this is the reason that he achieved his goal. So if there are objects or what ever you find and feel the attraction and meaning with it, take it and use it as your personal focus point like I did today with my 10c coin, because, I felt the attraction and meaning with it.

Act when the “Law of Attraction” is working with you…

If you recieve the signal from the Universe through te “Law of Attraction“,

give the Universe a signal back that you did an call of action through the positive feeling that you now have and you are greatfull about this. 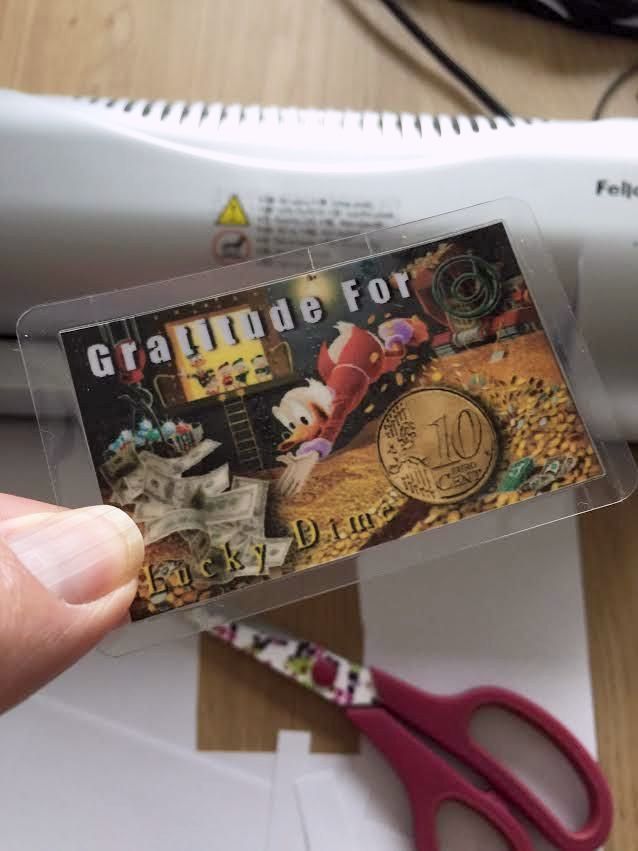 I save this gratitude-Card in in my iPhone-Case and ervery time I see this card I have to think of something that I am grateful about. In the right corner you can also see the gratitude sign.

You can use everything as gratitude object so I made this Gratitude-Card because my inner voice and feeling told me so.

See this Youtube part about the gratitude rock from the movie “The secret“.

A motto of Scrooge’s is “Work Smarter, Not Harder“, look about this topic at this Youtube movie;

If you want to know more about Scrooge McDuck then you can find some interesting things here.

If you want to read more about al my treated articles, you can also go to my eBook-Store. Enter this code (Health-Blog-Introduction) to get an extra 50% discount in your shopping Cart.

Why this Motivational & Health Blog ?

Motivational- and Health Tips to take back control of your healthy lifestyle and get on track to the path of wellness. Important Healthy Lifestyle Tips You NEED to KNOW before you can make any decisions to get a Healthier Lifestyle.

My strength is to combine information from different sources and categories and bring this to a whole new level and simplify this information for you. Mostly this is about science and health issues like: self-help, natural healing and the newest medical developments.

We treat the human health as whole (Physical & Mental).

We want to Serve You…

I'm constantly on the Internet to seek out solutions for your health problems so you can get a Healthy Lifestyle with our Health Tips.

When I find interesting solutions than I write about this in this blog and show you the links. But most important of all..., you deside if you want to go for it or not. You also decide if you come back to this Health-Blog.

We don't use email-lists or sales-funnels. If we deside to give you something, it's really free and no obligation.

Aug
2016
06 Secrets About Your Inner Dialogue or Inner Voice

Jul
2016
08 Important tips to use your mindset and focus, you can do it to achieve goals 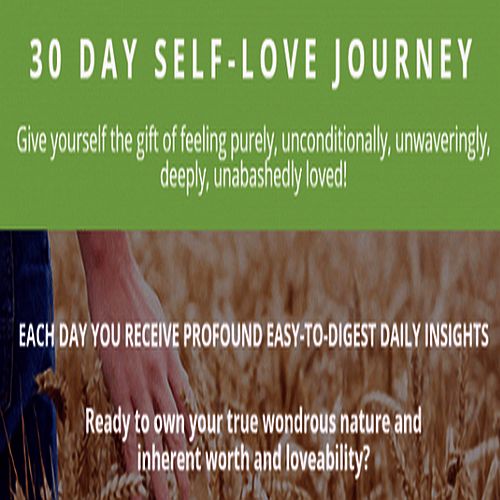 Be Able To Control Your Own Destiny!